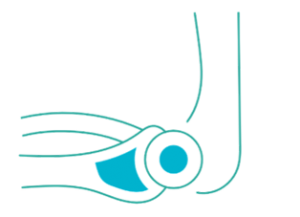 Rapid Relief from the Symptoms of Cubital Tunnel Syndrome

Cubital Tunnel Syndrome describes a group of symptoms caused by the compression of a major nerve (ulnar nerve) passing behind the back of the elbow. Before passing into the forearm, the ulnar nerve passes through the “Cubital Tunnel”, a passage created by the arm bone (humerus) and a ligament, which makes the nerve prone to compression.

There are a number of possible causes of cubital tunnel syndrome, including abnormal compressive anatomy at the elbow, arthritis of the elbow, inflammation and swellings surrounding the ulnar nerve at the elbow.

Compression of the ulnar nerve at the Cubital Tunnel may cause weakness of some of the muscles in the hand, causing a characteristic deformity (clawing). Patients may also experience pins and needles or numbness along the little finger and part of the ring finger. These symptoms may come and go, but as compression of the nerve worsens, they may become constant.

A diagnosis can usually be made from a characteristic set of symptoms and clinical examination. However, sometimes it is useful to have further investigations, including nerve conduction studies, ultrasound scans or MRI scans of the elbow to confirm the presence of Cubital Tunnel Syndrome.

Some cases of Cubital Tunnel Syndrome resolve on their own without active treatment. However, cases often recur, when it may then be advised to have further treatment.

Cubital Tunnel Syndrome can be readily corrected with minor surgery to the elbow. Surgery may involve decompression of the nerve by removing a small amount of bone and ligament, or movement of the ulnar nerve to the front of the elbow (transposition). This aims to prevent long term damage to the ulnar nerve and potentially irreversible muscle weakness. This surgery is may be performed under local or general anaesthetic and will leave a small scar on the inner side of the elbow. This operation is performed as a day case procedure, so patients usually go home on the same day as the surgery. It may take a few weeks to regain full strength in the forearm and hand following surgery. As with any operation, there is a small risk of postoperative pain, bleeding, infection and damage to surrounding structures, including blood vessels and nerves. Mr Anton Fries, Consultant in reconstructive hand and plastic surgery, would be delighted to discuss management of your Cubital Tunnel Syndrome symptoms during a private consultation.

Mild to moderate Cubital Tunnel Syndrome symptoms may be initially managed by wearing an elbow splint regularly, most commonly during the night. This aims to reduce the pressure applied to the ulnar nerve at the elbow. Splinting may be combined with physiotherapy and painkillers to improve symptoms.